Switchgear application hybridisation is an emerging field of deployment for distribution network switchgear such as Automatic Circuit Reclosers (ACRs). The roles which these units fulfil on the network is diversifying rapidly, as the applicability of a single unit which incorporates circuit breaker, sensors and control has many applications.

Switchgear application hybridisation is an emerging field of deployment for distribution network switchgear such as Automatic Circuit Reclosers (ACRs). The roles which these units fulfil on the network is diversifying rapidly, as the applicability of a single unit which incorporates circuit breaker, sensors and control has many applications.

A major recent development is the hybridisation of a Recloser to include Sectionaliser functionality. To historic users of both of these technologies, it seems strange to reduce an ACR’s functionality to address a sectionaliser role. In a modern network, deploying a recloser or a sectionaliser is almost fiscally equal, making savings in inventory, training and organisational management of a single product a wise choice.

Historically, Sectionalisers and Reclosers worked in harmony, fulfilling two separate requirements. Reclosers were used as active protection devices, who used their sensors to detect fault situations and trip their Circuit Breaker to interrupt the fault current. As such, Reclosers are considered “Fault- Breaking” devices. Multiple Reclosers could be deployed along a single feeder to provide a segmentation of the line, so that a fault at the far end of the feeder would not result in a complete feeder outage. Provided that each downstream recloser was faster than the upstream unit, the unit closest to the fault would trip, and they would act in harmony.

This is philosophically the concept of protection grading. The total number of reclosers you could deploy, relies on how fast your first recloser has to be to beat the substation circuit breaker, and then the difference (grading margin) between each subsequent recloser along the line. When you ran out of margin, you couldn’t put in more traditional reclosers. But there is a device that cares less about grading, giving you more segmentation when you don’t have sufficient grading – these are sectionalisers.

The key difference between a sectionaliser and a recloser, is that the former does not have the capability to break fault current.  But this is not necessary, because the objective is to operate in harmony with protection devices such as reclosers and other circuit breakers. Sectionalisers watch for fault current, then wait for upstream protection devices to operate, before opening in the time there is no current on the line – i.e. the Dead Time.

If a sectionaliser sees a fault, then a clearance, then it knows that there must be a downstream fault. Therefore, when it opens, it provides additional segmentation to the line. 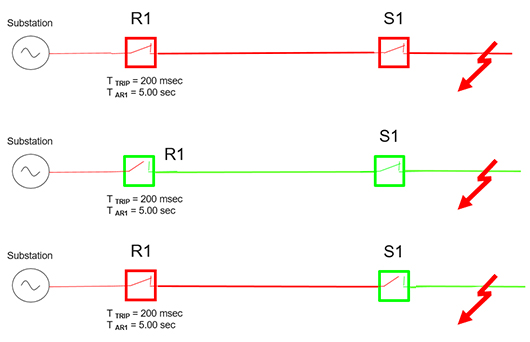 
Now that intelligent Sectionalisers and Reclosers are almost identical from a cost basis, using a recloser as a sectionaliser provides you with multiple benefits. These include product standardization, reduction in total risk, reduction in training requirements, and more versatility in application. NOJA Power OSM Reclosers can even be configured to act as a Recloser in one Power Flow Direction and as a sectionaliser in the other – invaluable in a modern network with varied power flows and grading margins.

Whilst the concept of calculating sectionaliser settings is worthy of its own application note, philosophically there are extensive equivalences between Recloser deployment as a Sectionaliser.


Therefore, a 3 Shot to Lockout Sequence Setting in an OSM Recloser as a Recloser would look like this:

An equivalent 3 Counts to Open Sectionalise sequence in the same recloser would look like the following:

Both Settings would require “AR On” to be enabled, otherwise they both would act as a single shot operation. Reclosers would trip straight to lockout, and Sectionalisers would operate on the first fault passage and isolation.

The beauty of the “shared settings” architecture is that Engineers are equipped with the ability to switch operating modes of the switchgear remotely, providing versatility depending on power flow. For example, a recloser which has Group 1 Settings for Recloser Mode and Group 2 Settings for Sectionaliser mode, could change from group 1 to 2 and maintain the same sequence length settings and behaviour.

If this overview has piqued your interest or you have a unique application to share, we would love to hear from you. Visit us at www.nojapower.com.au or contact your local NOJA Power Distributor.

Figure 1: A Single Line Diagram of a Ring Feed with Reclosers.