NOJA Power’s GMK Ground Mount Kiosk Circuit Breaker is finding applications worldwide in connecting industrial equipment and distributed energy resources to the medium voltage grid. The GMK is a unique switchgear assembly, which is a highly customisable, integrated switchgear kiosk, allowing engineers to fully specify a point of common coupling in a single device, which is factory tested and delivered to site ready for connection.

So, the question emerges, is the GMK a Ring Main Unit?

The short answer is no. They are unique devices for different applications, and while RMU’s have been traditionally used for underground cables, NOJA Power’s GMK incorporates a few more features that makes it unique.

Fundamentally, RMUs are used in distribution networks to provide switching points and limited protection functionality on underground cable runs. This arrangement maximises network uptime, allowing individual sections to be isolated if there is a cable fault. 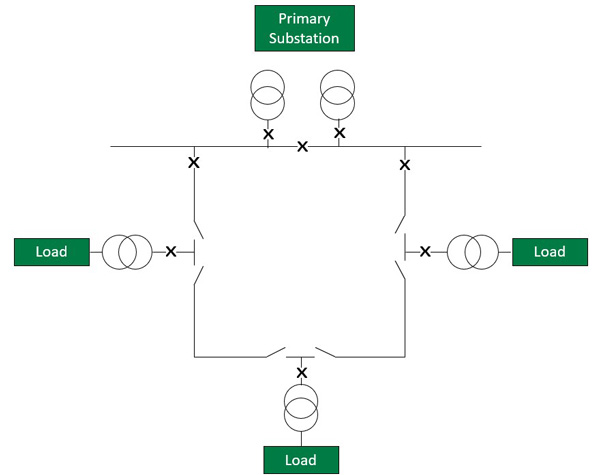 When connecting renewable energy and distributed energy resources however, the requirements for switchgear are much higher. Protection of generation equipment is essential to minimise faults and get the maximum return from your infrastructure. Unlike RMU’s that require separate protection relays, possibly adding the need for a control room, NOJA Power’s GMK is a fully-integrated outdoor rated asset. It is prefabricated switchgear in a weatherproof metal enclosure, reducing civil works in installation as the GMK can be installed on a plinth in the elements.

Ring Main Units also tend to have a limit on the quantity of instrumentation and earthing on any individual leg of the switchgear. NOJA Power’s GMK has sufficient real estate to provide for earth switches, multiple auxiliary sensors and power supplies, along with the conventional protection and automation capabilities of the OSM Recloser circuit breaker core. This allows engineers to integrate more functions of the connection point into a single device, saving commissioning and installation costs.

This versatility of installation applications has spawned multiple design topologies for the NOJA Power GMK. Based on global experience, a collation of the most common installations has been made available here.

Lastly, and by no means least, the NOJA Power GMK is free of SF6 gas. SF6 has 23,500 times the greenhouse potential of CO2, with an atmospheric half life of 3,200 years. Most modern RMUs use SF6 gas as insulation. Using an RMU to connect renewable energy greatly reduces the environmental benefit of renewable energy generation. SF6 free switchgear such as the GMK is far better aligned with the triple bottom line of businesses operating renewable generation assets.

OSM Reclosers with Palm Connectors rolling off the production line